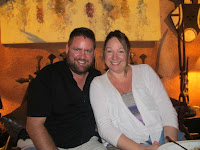 On Tuesday, Mike, Amy and Delaney (and Apple) Riddering arrived in Ougadougou, Burkina Faso.  Below is Mike’s first letter detailing the events of their first few days in the capital city. It is well worth reading. Let me encourage you to keep them in prayer!

You officially have Missionaries on African soil! It has been a wild few days. The flights were long, and we feel a little beat up, but we are all here and accounted for. The first leg of our journey went from Miami to Paris. The plane was delayed so we had to run through the airport after we picked up our dog from baggage and try to check her in for the next flight. We ended up making it with minutes to spare. Then we left France and landed in Niamey, Niger where we had to sit on the runway for an hour before taking off once again to Ougadougou. The good news is that the Ouagadougou airport has had some major improvements since I was here last year! They actually had a luggage belt instead of the former “Mountain ‘O Luggage” that you had to climb and pick through in the past. A huge difference!

Then we knew we were in Africa. We had 30 people trying to help with luggage and helping escort us to the 60 taxi drivers outside trying to drive us. We were able to negotiate a fair price for 2 Taxis (one for us, one for luggage). After my taxi driver asked me to step out and help push start the taxi, we were on our way. Driving through Ouaga is a life experience that I look forward to Jose enjoying! They whisked us away with luggage tied to the roof, luggage in the seats, and 4 white people and a dog hanging on for dear life! We arrived at a missionaries home here in the capital that we rented for a few days while they are state side. End day one!

We woke the next morning and were greeted by a local that the missionaries recommended. He speaks good english, and was able to show us around town a bit. We went to the market and around town to look at housewares and other little items that we will be needing for the house in Yako, as well as getting our cell phones. After going to 3 different cell phone companies, we found one that actually had 2 phones in stock. YAY! Being that the cell phone purchase itself was a few hour process, we decided to call it quits for the day and head home and prepare to go out to dinner for Amy’s birthday. 7:00 rolls around and we go to dinner at a place very near here called Gondwana. After a great dinner with our new friends, most of us were ready to retire. My brain on the other hand was zipping on eastern standard time still, so I was wide awake until well after 2 a.m! Being that I forgot to find a converter for the chargers on the computers, we were down to facebooking on I-Pods (If i was a little more “hip” of course I would have had many options for electronics at this point…….. I did not. 🙂 End day 2! 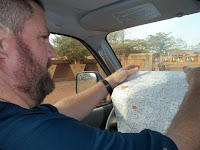 Today was day 3. I woke up early, and hit the road with our friend Johoachim. That’s when Amy had the great Idea of taking the truck and taking a look around town. It was fun for the first hour or two, but was difficult for the next three as I tried to find our way home. SO LOST!!! Yes, it was dark and late, but we made it home. I realized how useless a road map is, if streets dont have any names! WOW! Cant wait to go to Yako! We leave for our home in Yako tomorrow at noon. We will spend Christmas there at the orphanage with the children and 2 short term missionaries from Germany! We will then return to the capital on January 3rd to begin 2 weeks of language lessons.

It is quite the adventure that God has us on! One thing that I have certainly learned is that there is never a dull moment when were living a life submitted to God!

Looking forward to sharing with you soon!